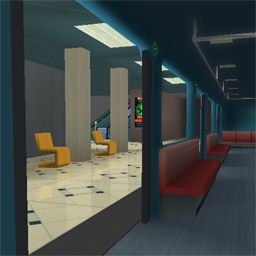 This is my 6th own track, thx for downloading and trying it!

I dedicate this track to Gabor Varga whom I regard as my teacher, although I dont know him personally, but his informative and encouraging e-mails helped me to keep up in the work. Thanks to the Acclaim-Team for the game and for the fine working ASE-Tools converter util to its creators (to Gabor among them). Thanks for tolerance to my wife and for ideas to my children. Thanks for the encouragement and for the tips and instructions to all the online players and track creators. Thx for the „city by night” texture to hilaire9 (colour-modification by me). Thx to sjampo for testing the track.

Tonight, like usually all the underground stations in New Volt City are closed. But they are not empty! The so called rc-car-hooligans appeared on two central stations. Nobody knows from where they used to come out and no one can find the trace of them. The only material proof against them is an empty bottle of paint spray found by an officer on the Harvester Park station in January of 1998. Seldom they appeare in the daytime, the city police has two video records made by tourists. One of the records shows two rc-cars flashing between the legs of passengers with blue electric light on them. The police has no technology to catch the trouble-makers at the moment.

The sceen is our favorite subway station in New Volt City at night. The staff has left the station, the security service has been blinded with a fake video, played by a player pluged into a safety camera’s output (like we used to do it J ). In place of lenghty analisation I enclosed a map in the installed level folder which shows you our tonight’s racing line. (its quality isnt too fine, because I didnt want to make a big size readme, you can easily zoom in the map in windows Paint for example, or in picture&fax viewer) There is a train waiting for the early morning clean up, we will pass through one of its carriage. We use the warehouse tonight to get to the Ballistical Institute Station. Watch out on this station, workers was waxing the floor, its a little bit slippery on an area.