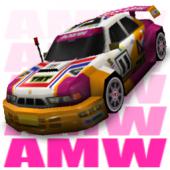 AMW is one of the many selectable standard cars available to Re-Volt.

AMW is a Glow-powered car with a RWD drivetrain, classified under the Pro rating.

AMW's biggest benefit is its impressive top speed. It peaks at a speed of 43 mph (67 kph), being on-par with another fast car, Purp XL. This allows the vehicle to perform decently in tracks, especially those with long straightaways. Its grip is also decent, rarely losing traction unexpectedly in most surfaces, which is quite remarkable considering the vehicle's RWD drivetrain.

Unfortunately, AMW does not possess any other advantages, and instead is plagued with many flaws that diminishes its viability. AMW is very light; it only weighs at a mere kilogram, far less than the mode weight of 2 kilograms in its rating. This makes AMW excessively vulnerable from Pickups; an impact or two from items such as Fireworks or Water Balloons, will usually send the vehicle meters away, disrupting and causing the car to lose control much easier than normal.

Contrary to what is listed on the Car Selection Screen, its acceleration is actually deplorable. It reaches it top speed by 2.28 m/s², only surpassing its console exclusive counterpart, Fulon X. Its poor acceleration makes it hard for AMW to reach its top speed, causing further disappointment, especially from the fact that Cougar outclasses AMW both in top speed and acceleration.

AMW's biggest disadvantage is easily its cornering ability. The vehicle's turning radius is awful, coercing the user to slow down in almost every single corner. In fact, AMW's turning radius is excessively wide that its turns have become very 'rail-like', meaning that the vehicle struggles to complete the narrowest of turns. Its cornering ability is very similar to Pole Poz, however AMW's complications tend to be more severe due to having a higher top speed and rating in general, entering such corners at a very fast pace compared to the aforementioned car.

Overall, AMW possesses good top speed and traction, but is crippled from serious disadvantages relating to acceleration, weight, and most notably, its turning radius. The car is essentially outclassed by many competitors, especially Cougar who surpasses AMW in every single field. As a result, AMW is a poor performing car in the Pro rating, demanding high technical skill but in return demonstrates low potential, which is further seen with the AI placing at the bottom of the pack in many races.

Most Wanted, by Trixed 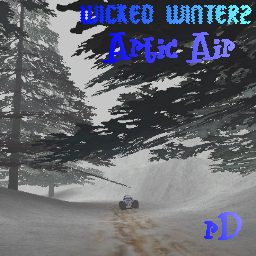 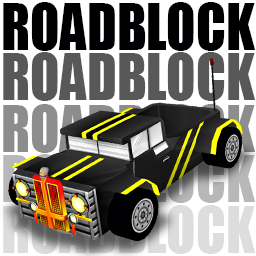 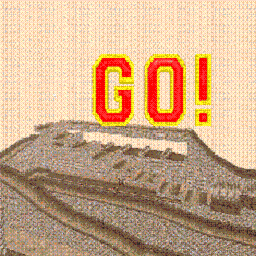 Lego Track
by Steven and 04