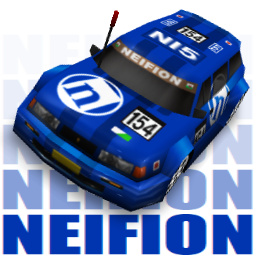 Useless things to know about this car:
- This car is part of the JGPlus project
- This car is created with Joe Groombridge style (the author of Adeon, Toyeca, Humma/Pemto, Cougar, AMW, Volken Turbo, BigVolt, BossVolt, Pole Poz, Rotor, Dr. Grudge, Col Moss, Harvester, Candy Pebbles, Bertha Ballistics and all the DC counterparts of these cars that have one)
- The theme of the car was inspired by Adeon, i was curious to discover the origins of Adeon's name to make something with the same style. Thanks to the JGPlus Team investigations we concluded that the closest thing could be that it is a Welsh name, so i searches for similar sounding welsh name and chosed one that starts with a different letter than A and eventually choosed Neifion
- Neifion meaning is apparently connected to Neptune, for this reason i choosed the color Blue. Regarding the skin, i wanted to make it with Adeon style of course but i also didn't want to copy it completely, this is why i decided to change some details like using 2 stripes instead of 1, different sponsors and the logo on the hood in the opposite side