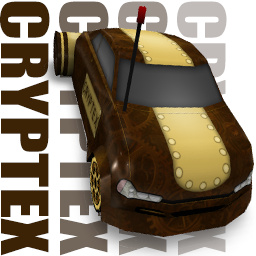 An old project and "dream" originally built by Gigi, with a revamped model and a fresh coat of paint by yours truly.

This car started its life as "Futuristic", a lightning-decorated space age car with a gimmick: the rear section is hollow and contains a rotating cylinder with lights, simulating a Matrix-style glowing text effect. Gigi approached me saying "please save this idea because it works well but I don't think I have the skill to make it pop as much as it would deserve", and after a few months the final iteration of the car was finally born. Halfway through the development I had the idea to include a cryptex styled skin, and Gigi liked it so much he let me change the car name to Cryptex. You know, rotating cylinders...

Comes with two variations of the aforementioned cryptex styled skin, as well as a third one, true to the original Futuristic idea. A PSD paintkit is also provided. Electric motor sound by FBV-86. Front rims on the purple skin by LivingWithGames.

On the parameters side of things, it behaves like a generic 4WD grip focused Super Pro car, with a trick up its sleeve: to offset its tendency to stick to walls due to the different track widths, it comes with mid-air self levelling capabilities, meaning it will try to land jumps as flat as possible - another trick borrowed from FBV-86.