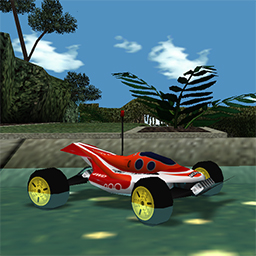 This is a new custom buggy for the amateur class, called Koin Karp. I think his fish-design is clear to see ,)

His carbody should have a flat, streamlined form language. So i've modeled two optical monoshocks on both axles, which provided the flat-roofed building. It can be chosen 5 different paint jobs and every paintind are based on the colours of a koi carp species. For the rim design, i was inspired by japanese coins and the yen logo.

He has a 540 'High Five 40' electro motor, which gives him a topspeed of 54kmh. His acceleration is not the fastest but well enough for an amateur buggy. With the four-wheel drive it gets a good driving performance with a slightly oversteer, which is easy to handle.