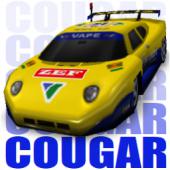 Cougar is one of many playable standard RC cars available in Re-Volt.

Cougar is a Glow-powered car equipped with a FWD drivetrain, classified under the Pro rating.

Cougar is best known for its characteristic as the fastest car in its rating, narrowly surpassing the top speed of Panga, as well as being one of the fastest cars in the whole game, only being surpassed by Semi-Pro visual counterpart RV Loco. Blessed with an outstanding peak speed of 43 mph (69 kph), Cougar is able to travel across straightaways at an insane pace, proving to be effective in tracks such as Toys in the Hood 1, Toytanic 1, and Toytanic 2, creating a large gap between the car and its competitors. Like many other Pro rating cars, Cougar also has a mass of 2 kilograms, taking impacts from Pickups decently at times.

In addition to the car's spectacular top speed, Cougar also possesses amazing grip. The vehicle is very stable when cornering, rarely spinning out of control which is spectacular considering the rate of speed when it enters corners. Its traction is further supplemented from the vehicle's FWD drivetrain, being able to traverse the freezer section in SuperMarket 2 or the backyard sections in Toys in the Hood 2 with no difficulties at all in terms of friction.

However, Cougar has some weaknesses. Its acceleration is below average overall when compared to the rest of its competitors in its rating. Clocking in a substandard 2.34 m/s², Cougar only accelerates faster than AMW and Fulon X, but is outclassed by all other cars in its rating. This makes it difficult for Cougar to reach its amazing top speed in the first place, heavily relying on long straightaways in order to secure wins. As a result, utilizing and making the most of Cougar's FWD drivetrain is essential in order to perform well. Despite its poor acceleration, Cougar's transmission allows it to get extra thrust and stability in the direction it is steering in, making counter-steering from lost grip quicker than most cars in the Pro rating.

Despite having good traction due to the FWD transmission, it also makes Cougar very susceptible to understeer. The vehicle possesses an unremarkable turning radius, forcing the car to forgo its high top speed before entering tight corners, as well as coercing it to powerslide in some situations. Coupled with a poor corner exiting ability due to its middling acceleration, Cougar suffers the most in tracks with plenty of sudden and narrow corners, such as Toy World 2 and SuperMarket 1. The vehicle is also wide and flat, increasing the frequency for the player to manually flip the car back up, which can be disastrous at crucial times.

Overall, Cougar excels best in top speed, dominating in races consisting of wide, open tracks due to this advantage. Its potential is further inflated thanks to its impressive grip and its ability to attain mobility from lost traction even with its shabby acceleration. However, it is most weak in both turning radius and the aforementioned acceleration, demonstrating major problems in the narrowest of corners. Regardless, its flaws are not excessively problematic, and Cougar remains as one of the most potent cars in its rating.