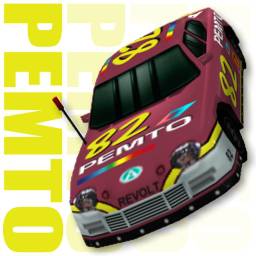 Pemto is a car that can be found on Joe Groombridge's website. Joe Groombridge was one of the artists that made the original Re-Volt stock cars, but Pemto got never released. The picture on his homepage is the only picture available from this car.

StrixMidnight did a great first custom version of Pemto. His version was based on the Humma/SNW35 body. In 2017 the original Pemto body became available, because the lost car 'Mc RC' was found.

We used this opportunity, to rebuild the original Pemto as good as possible. The car has a RWD drive and is quiet fast for the Semi-Pro class. It has a higher top-speed then Zipper and Adeon, but some weaknesses as well. Pemto don't like walls for example - so better avoid to hit them! Also slippery roads are not his favourite terrain. But if you invest some time, you can do some fine results against other cars in this class.

Texture and boxart size are matching the classical Re-Volt style.