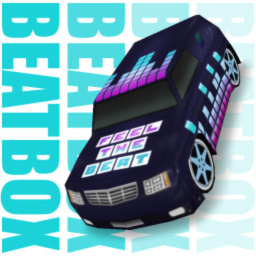 Get ready for an experience out of this world in your ears with this music powered, Cadillac inspired truck.
I've been listening for music way to long, and i really wanted to express my love to it in something, so why not making a stanced land boat with dark purple colors and a flashy livery with a pair of subwofers exposed on the rear?

This big chunk of metal is fast, has a good stability and can obliterate most of the Advanced class cars in acceleration, but that's only to compesate for it's clumsiness in turning and having a small chance of flipping while driving with an active battery.