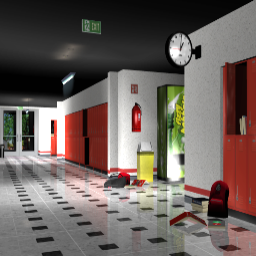 1 PM. The last day of school is over. What about using the local high school for some cool RC car races? Driving through the classrooms, the gym and the outdoor sports field, as well as the surrounding neighborhood. Is there anything better to celebrate the beginning of the summer holidays? :)

This track is meant to be an ultimate tribute to the game we all love. Highly influenced by custom stock-like gems like PetroVolt or Jailhouse Rock, the track is also using well-known parts from Toys in the Hood and Supermarket.

Major features of School's Out!:

The track won't be the same without the help from this Re-Volters: