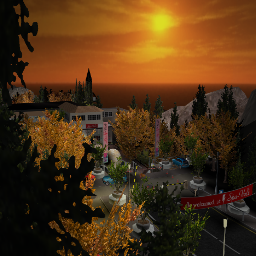 This is an alternate version of the first Spa-Volt.

Horray, the storm is over! The terrible nightly thunderstorm caused a lot of damage to the environment, so the Spa kept closed the next day. This is the perfect chance for having another RC-car race at Spa-Volt! :)

It was a sunny and warm day in the beginning of the autumn season. The sun is going down in the next hour and throwing long shadows over the bathing area. Crickets are using the chance for chirping maybe for the last time this year. Crows are circeling above the Spa, searching for crickets for their dinner. Who is the fastest in this most romantic and peaceful place on earth?