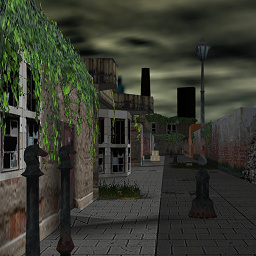 I was very interested in RV_Pure's Desolate District 1, so i wanted to create my own part of this track. The hype of this track was big in 2021 and i asked RV_Pure, if i can help him. He said, he need time to work alone on this track. That's the reason, why i started part 2. I created the most stuff here, unless some instances. The lamps, banks & the parking station for horses are from me.
The models of this track themself are also from me. I got all default textures from RV_Pure.

Thank's to RV_Pure for the great idea.

If you see some issues or bugs, you can send me a message on Discord. Also you are invited to join our Re-Volt Plus community (Also playable with I/O). We have some exclusive and edited content in the best Re-Volt quality.