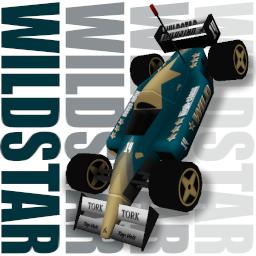 From the circuit to your frontend. Ready for mayhem!

Wildstar is an open-wheel, Formula-inspired toy. Its' high performance and state-of-the-art handling may get you to a stylish victory. However, you might want to avoid any type of pick-up combat, as its' resistance leaves much to be desired.

Acclaim F1 was used as a base. Inspired by the Mclaren MP4/4, a real-life Formula 1 car.

This car ships with 2 extra skins, made by fr13ndz0n3dguy. It caught his attention, and asked if he could make some, and so he did.

HUGE thanks to the aforementioned creator for helping out with setting up the axles. Much appreciated, man!

Big thanks to BloodBTF, Powerate and Gforce for playtesting the car.

1.1 update notes:
Using the feedback received from a handful of racers, I decided to make some changes:

-DRAMATIC maneuverability upgrade to give the lightweight car more of a chance in packed grids.
-Hull adjustments.

Just in case, I've left the original parameters within the car, so you might want to swap it in if you preferred the old tuning. That's all, folks!